Popular Searches
imageek hub What is a Mini-LED? New iPad Pros and MacBooks with it may be coming soon

What is a Mini-LED? New iPad Pros and MacBooks with it may be coming soon

Media reports indicate that Apple will use Mini-LED technology in the new iPad Pro and MacBook Pro models as a significant upgrade point.

What is a Mini-LED? What are the advantages of screens compared to today? Why didn't Apple choose OLED, the dominant mobile phone market? This article will revolve around these several questions; if you are interested in understanding, you might as well follow this article to explore what it is.

What is a Mini-LED? What are the advantages and disadvantages?

At present, the screens on the market are divided by materials, mainly LCD and OLED. OLED has gradually replaced LCD in the mobile phone market in recent years, even in more affordable models.

LCD, namely liquid crystal display, its luminous principle mainly depends on the backlight layer (backlight, colour filter, liquid crystal three indispensables); OLED, on the other hand, relies on the coating of organic compounds to give off light, and it will light up when the electricity is turned on. Besides, there is no liquid crystal layer or backlight layer. Compared with LCD, OLED has high contrast and high saturation and has the advantages of being thin, light, flexible and energy saving. Hence, there is enormous market development space.

In such a competitive background, traditional LCD screens are also looking for breakthroughs. In addition to the emergence of Local Dimming (LD, Local Dimming), Mi-LED technology also arises at the historical moment: It is not a new screen material, but a screen backlight technology to upgrade the LCD layer backlight, the backlight in the LED light Mini.

In general, the LED backlight equipped with the traditional LCD screen only supports unified adjustment, and the light and shade of a particular area cannot be adjusted separately. However, the screen can be partitioned with the aid of LD, and the brightness can be adjusted independently (limited by the bulb's size, the number of partitions is still limited). 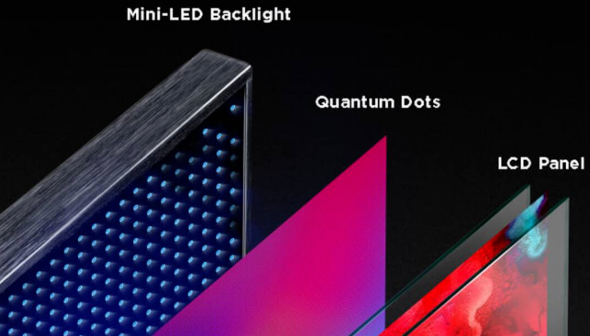 Mini-LED technology's difference is that its smaller backlight bulbs allow more backlight bulbs to be integrated into a single screen, making it thin and flexible and allowing local dimming to provide a much more OK backlight partition than before. They achieve a more pixelated dynamic backlighting effect (better control of backlighting and better image display quality).

Based on the above characteristics, the advantages of Mini-LED technology are undeniable:

Compared to LCD, it has higher screen brightness and contrast: combined with local dimming, it supports single control of more screen area, and the shading control is more flexible. On a pure black background, the partitions can be dimmed or even turned off to get a contrast close to that of an OLED screen.

Compared to OLED, there is no low flash, and it has a longer life. Because of the traditional backlight layer, the Mini-LEDs do not have the common flash problems of OLED screens, and they do not have uneven brightness and screen burning problems caused by the short life of organic materials.

The Pro Display XDR, which uses similar technology (but not the Mini-LED1) and is backlit by 576 blue LEDs, is the best proof of advantage one: a full-screen sustained brightness of 1000 Nits, peak brightness of 1600 Nits, and a contrast ratio of 100000:1.

Why did Apple choose the Mini-LED?

Although the iPad and MacBook screens are among the first echelons in the market, traditional LCD screens are limited by congenital conditions and have minimal room for improvement. They cannot have OLED screens' advantages such as no backlight, self-illumination, larger viewing Angle, rich colours, significant energy saving, flexible bending, and so on.

But there are significant downsides to straight OLED screens:

It is not suitable for tablets and computers with long service life because of its short life and easy ageing. The sub-pixels of the OLED screen are self-illuminated. If the screen displays the same picture for a long time, the image's sub-pixels will be working, and the service life will be reduced for a long time, even leaving residual shadows in the screen area (burning screen).

Increased reliance on Samsung reduces bargaining power: Samsung now produces most screen panels for devices like the iPhone. If Apple continues to use Samsung's boards for the rest of its product line, it will be at Samsung's mercy in the long term. Apple recently paid Samsung compensation for a lower-than-expected purchase of iPhone 12 Mini screens. (Similar reparations occurred in 2019 and 2020);

Long-term costs remain high: Even though OLED screens have improved in terms of capacity and cost over the years of development and technology iteration, they stay high for a long time compared to cheaper LCD screens and Mini-LED technology, where costs decline as the technology matures.

In this context, the advantages of the Mi-LED technology (in combination with local dimming) are apparent to Apple: greater viewing Angle, richer colours, greater energy efficiency, flexible bending, and so on, without longevity issues or deepening reliance on Samsung. Even though Mini-LED technology's cost is currently high, according to the research of LED INSIDE, the cost of Mini-LED technology is expected to be lower than that of OLED in 2022, forming more substantial market competitiveness.

And Apple can also use the Mini-LED technology to upgrade the screen of the more high-end and professional Pro series of iPad and MacBook, to better distinguish it from other series of products.

The disadvantages of Mini-LED technology are also obvious:

In the most common electronic devices, mobile phones (small, high-pixel density screens), Mini-LED technology has been limited by pixel density, thickness and power consumption and has never replaced OLED. (The short life span of OLED devices is not a problem, given the short replacement cycle of phones.) In the coming years, mobile screens should continue to be dominated by OLED with high refresh rates and breakthroughs in power consumption control.

According to The ELEC, Samsung will start producing OLED screens with LTPO technology for Apple in The first half of 2021. The screens are expected to have lower power consumption than traditional OLED screens and a 120Hz refresh rate for The new iPhone.

But in the next few years, Mini-LED technology will be widely used in large and medium-sized monitors and LCD TVs with long replacement cycles and life spans. It closes the gap between LCD and OLED, allowing LCD screens to match the colour quality and contrast of OLED, without the problem of OLED's short service life. But the Mi-LED technology will have to come down in cost quickly before it can genuinely displace traditional LCDs and compete on price with OLED.

As for the real future of screens in electronic devices, it is widely believed in the industry to be micro-LED screen technology, dubbed the next generation of display technology.

Micro -LED is a micro-LED miniaturization and matrix technology. To put it simply, the LED backlight is thin-film, miniaturized and arrayed, with high integration and the characteristics of self-illumination without backlight (inorganic gallium nitride is used as the luminescent material, and its service life is longer than that of organic materials of OLED). Mini-LED is between traditional LED and micro-LED, simply speaking, it is an improved backlight technology based on the conventional LED backlight. Compared with LCD and OLED, micro-LED has apparent advantages in brightness, resolution, contrast, energy consumption, service life, response speed and thermal stability.

The advantages of micro-LED also made overseas giants such as Apple, Samsung, Sony and LG invest in research and development one after another. Currently, there are two main development trends: outdoor/indoor public display with small spacing and large size and high resolution, and consumer electronic display including mobile phone, computer, TV, head-mounted devices, etc.

But by 2021, the majority of products using Micro LED technology will remain in the prototype demo stage, and products that have progressed to commercialization are rare and expensive, such as Samsung's 110-inch Micro LED TV, which costs 170 million won, or about 1.25 million yuan.

According to inside, micro-LED technology is still immature, and the main challenges are key technology breakthroughs and mass production cost reductions. Commercialization in the mass consumer market is still a long way off.

Even so, its advantages suggest that it does represent the future of screens in electronic devices.