Popular Searches
imageek hub Intel 11 generation desktop Core on the 30th of this month which is worth getting?

Intel 11 generation desktop Core on the 30th of this month which is worth getting?

Although the players wait for AMD and NVIDIA on the same stage of the fierce competition, mining stirred up no goods a price. Ah. Woe to us PC gamers.

Unlike the graphics field, in the past two years, Intel has improved each upgrade's performance in the CPU field with more frequent updates. Meanwhile, it has also brought more cost-effective products, which is, of course, a good thing for players, as they can get more performance with less money.

Intel released three 11th-generation processors living in B station not long ago, respectively, Intel 11th-generation 11900K, 11700K and 11600KF. Watching the live video of B station, it is evident that they are all focused on the game market, and these CPUs also have a lot of noteworthy points.

With the release date of 3.30 approaching, I believe that many CPU geeks or ready to upgrade players are also looking forward to these U; let's talk about their views.

What are the upgrades for the 11 generation Core?

There are 19 SKUs in 11 generations of Intel desktop processors divided into i5, i7 and i9. Subdivision models offer K/F/KF/T, etc. The new B560/Z590 chipset launched simultaneously with the 11 generation Core is still the same as the original LGA1200. The 500 motherboard is also compatible with the 10 and 11 generation Core, and the old LGA1200 radiator can also continue to use. 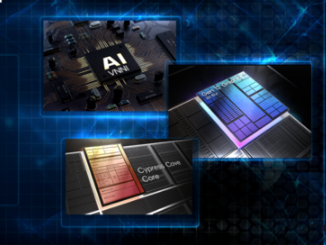 Based on the released information, the main updates are as follows:

Explicit instruction efficiency performance, from the perspective of the recently seen performance test, more than ten generations under the same frequency of 15-20%, increased performance single-core performance improvement is very significant, to rely on a high frequency. Mononuclear version such as game software has vast improvement; this is also the game's release on three CPU label, positioning is very accurate. The purpose is to regain always belong to Intel's game market.

The eleventh generation i5 and above shows a change from 24EU to 32EU;

According to the official Intel PowerPoint information, the display performance of the 11th generation can be improved by up to 50%. In the number of units and the individual EU performance, the core display is still at the level of the bright entry-level card in terms of performance.

It is expected that some online games with low requirements can be done. The previous mainstream HD530/HD630/UHD630 core graphics card performance can reach 60 frames + under the resolution of 1080P. If the account is improved by about 50% here, it can eat most mainstream online games.

This is the video entertainment support upgrade, enhanced video output interface; direct core output can also support high colour depth of the professional level display. 12 bit H265 hard decoding is the parameters of the professional level. For now, this is not the mainstream video form; the specifications of ordinary users even are rarely encountered in the field, but may gradually become mainstream after three to five years, for the graphic design class creators, this is meant to upgrade, but mainly for game users, 10 bit HDR 4 k still in the popularization stage, meaning is not very big. 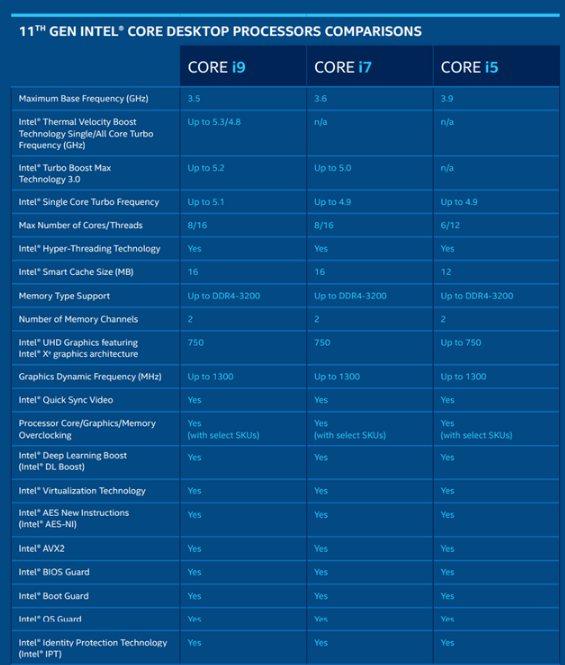 Overclocking has been the essential item of Intel, whether it's suitable or manual ultrasonic frequency amplitude has good performance, although only KKF series in the delegating overclocking ability further, mainstream terminal level B560 motherboard also began to support memory overclock, keep available memory XMP Settings, this means that players can also set the various timing, further freeing memory performance.

Interface specifications have been improved, and there has been a multiplier speed increase. Support the latest Thunderbolt 4 interface, native support USB 3.2 Gen 2x2 20Gbps interface, WiFi support to the newest Wifi6e, the new 6G frequency band, can be said to be an all-round improvement.

It supports up to 20 PCIe 4.0 processor direct connection channels, just 16X for the graphics card, 4X for NVME SSD, PCIe 4.0 NVME SSD has been available many, the speed of the basic can reach more than 5000MB/s, whether it is a game or productivity has been dramatically improved.

AI doesn't seem to be of much use. Computers don't have the exact AI performance requirements as phones, and they don't have many applications.

However, the latest PS and AE already have parts that need to be processed by AI, such as automatic image matting for content recognition and AI processing that has transformed images into 3D models. This kind of AI computing demand is also gradually increasing, as a productivity use, or sweeter, performance is compelling.

Without going into details, the Resizable Bar is a "black technology" that deals with AMD RX 6000 series and NVIDIA RTX 30 series graphics cards with access to the entire range of video memory and achieving, at most, a 10 per cent improvement in-game performance.

Compared with the previous generation i9-10900K, although the core is less, the frequency is lower. With the new architecture, the game performance can be improved by up to 14%, compared with the R9 5900X, can also have a maximum of about 10% performance improvement, finally, regain the face.

I have been paying close attention to this piece of U. Previously, I saw a picture showing that the game's performance is not as good as the previous generation i7-10700k, and even some backwards. However, now we can not conclude because the ban has not been officially released. The test environment will be different, and it is possible to steal low performance. At the same time, the price of the Intel i7-11700k is slightly better than the cost.

If it is video clip and picture processing or needs to use AI computing productivity needs, or it is recommended to match the Z590 motherboard, PCIE4.0 M.2 NVME SSD improved more obviously, especially suitable for the access of large capacity files. And like Thunderbolt 4 and 20G USB3.2 Gen2 in the transmission speed, it has a lot of improvement and improves work efficiency.

Wifi6e also has a lot of speed improvement compared with Wifi6. 6G frequency band is added based on Wifi6, so the bandwidth is improved, the delay is more minor, the stability is better, and the speed is faster. The file is stored in the form of may change, such as I am currently in use WiFi6 a host directly by connecting WiFi6 router reads the files on the NAS, cable and although there is a slight difference, on the whole, is not very big, small photo files are direct access to edit from the NAS, is no longer copy the file to the computer again after processing in the NAS, so that we can make seamless switching desktops and laptops, save steps, improve the convenience.

The price-performance of I5-11600KF U is still reasonable. It is the first choice for game players in pursuit of price performance. The previous generation 10600KF only supports 2666 memory, while the I5-11600KF supports DDR4 3200 frequency memory.

Overall, this Intel11 generation of Core of the three Intel CPUs can be said to be a more fragrant choice. The complete system upgrades to support PCIE4.0, motherboard disadvantages are no longer exist; there is not much gap between the two.

The most significant disadvantage and regret is still 14nm. This generation of CPU is the last 14nm LGA1200. The 12th generation of Alder Lake-S processor released in the second half of the year will be updated to 10nm LGA1700. A better choice is to have a Z490 motherboard that can be a single upgrade U, especially for creative needs, can get a very considerable performance improvement.

If now eager to upgrade or new computer configuration, games I7-11700 - k and I5-11600 of collocation Z490 configuration is lovely, high-cost performance, which has good overclocking space, can also be on the high frequency, perfect performance, the second in the creation and implementation of a substantial increase in the field of AI will bring good software experience, both games and productivity.

Anyway, CPU bound competition is a benign development. Indeed, we can see on the Intel generation of CPU of the long-awaited price war is in full swing, no accident of words as the generation of IU on sale, CPU market price war will be more intense, and has not yet launched this year 12 ages IU is probably the most suitable for the last few years generation time and upgrade, let's wait and see.