Ice god G360 is cooler the top position is higher one-piece water-cooled, after all, the level of the price reached one thousand yuan, is also the main RGB light effect as a selling point, has recently introduced the second generation ARGB lighting effects of ice god G360 dreamland, it compared to previous generations of RGB visual effects, in addition to the new water head and cold type internal details is also redesigned, this article is to look at how it all aspects of performance, cared about the friend of the cooling performance can be direct to the end of this article. 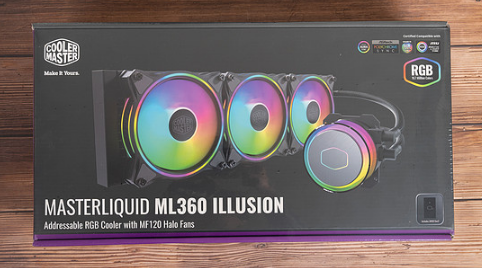 The packaging is designed in the iconic black and purple colour of calm and relaxed. The packaging can tell you some information. The RGB light effect supports the four leading board manufacturers' synchronization, 16.7 million colours can be adjusted, and the new ARGB fan and controller Hub. 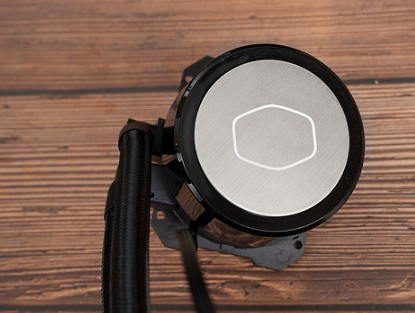 Water head of appearance, a new generation of ice god G360 called it a "dreamland", apparently because the translucent cover, around a circle and the top of the aluminium metal parts can give low-key literally lights (including cold header section has 12 independent lamp bead). On a generation of the connected area more and more natural, internal aspects, ice god G360 dreamland in the third generation of double cavity structure, heat dissipation performance is optimized. 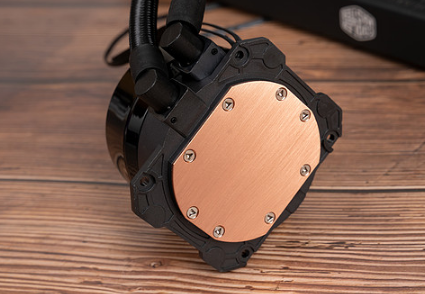 All copper base, the coverage area is not changed, or familiar with the mainstream of microchannel processing, this aspect is not to see what difference with the previous generation.

The cold exhaust fan uses the new Masterfan MF120 Halo, and the visual effect is mainly on the fan and aperture. It supports the second generation ARGB lamp's impact, with up to 24 independent lamp beads built-in. The whole set of water cooling has a total of 60 ARGB separate lamp beads. 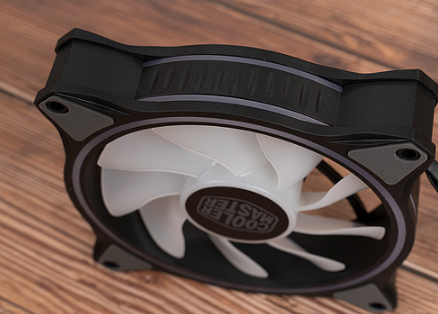 The side part also has the aperture design; the multi-angle view has no pressure, the four corners should have the fitting shock absorber pad. 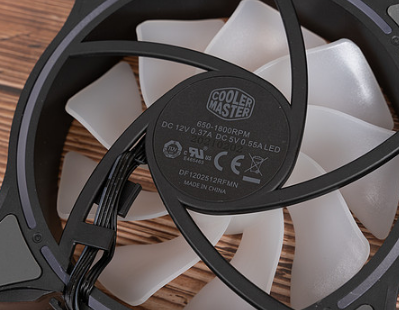 The Masterfan MF120 Halo has a rotating speed range of 650 to 1800RPM±10%. According to experience, the noise control should be OK. The fan can be purchased separately.

The specification is only 360mm, but we hope to launch the 280 and 240mm versions with 13 channel designs. According to the official statement, the fin height is increased compared with the previous generation, thus improving the heat dissipation area to a certain extent, and it is achieved under the condition of not changing the size of the cold exhaust, which can be said to be the extreme degree of dryness.

As the main product of the RGB element, it is also equipped with an RGB controller, and with MASTER PLUS + software, it can achieve the lighting effect in addition to the mainboard synchronization. It is worth noting that the fanlight interface is not a 3PIN universal tap but a clasp tap design. The RGB controller needs a SATA power supply when it works, and data transmission is achieved through a USB interface. This RGB controller also has good scalability, with three lighting device interfaces, and can be compatible with other excellent Ultra II ARGB products.

This test platform is a combination of micro-star MAG Z590 Tomahawk WiFi and I7-10700K. Although it is a bare machine test, water cooling requires a more minor air duct than air cooling.

More familiar with the Intel buckle, the mainstream of the bottom plate + four screw fixing mode. After the installation, the hardcore found that the aluminium metal LOGO part could be rotated manually. Of course, it had no damping, and 360° could be rotated.

The light display and overclocking test 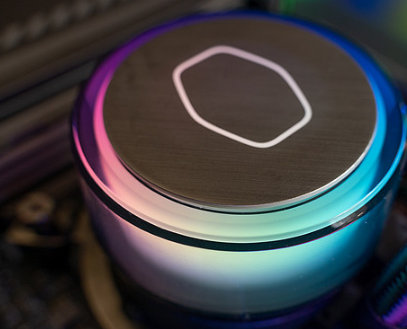 The Master plus + software supports nine preset light effect adjustments and some LED speed control. Master plus + integrates the integrated management of other excellent and superior devices, such as the MM720 mouse on the hardcore hand, which is very convenient. 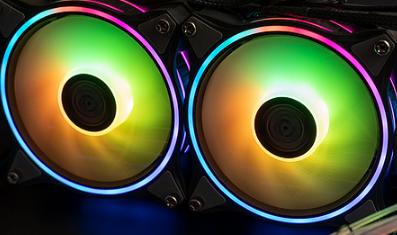 Water cooling headlamp effect is the most satisfying, only in the light of the moment you can feel, how to describe, image, it is a bit like a mass of jelly with colour changes, the design of the semi-transparent cover makes the cold head crystal clear, and the aluminium metal part will be slightly transparent, the actual effect is to highlight the LOGO. 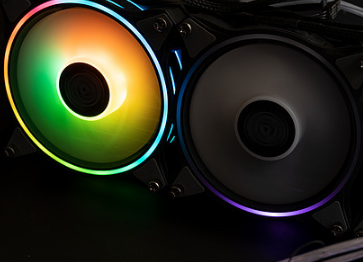 In addition to the whole set of water cooling can be transformed into nine kinds of lamp effects, but also to the water-cooling head, each cold exhaust fan can be set different lamp effects, the playability is higher, compatible with this RGB controller equipment, also can achieve this kind of play, there is two vacant equipment interface. 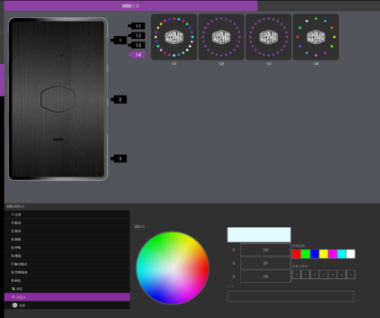 Set different light effect because each soft effect style is very different; Ice God G360 fantasy is personalized but mainly depends on whether I can accept it.

The most prominent feature of this water-cooled DIY is the colour control of the independent lamp beads. The whole water-cooled set has 60 separate lamp beads, each of which can be set into different colours and specific to the RGB value.

Adjacent individual light beads set to two colours will merge into a new colour by the fundamental laws of colour. In the "jelly" appearance of the cold head, the colour transition is very natural, of course, thanks to the second generation of ARGB lamp effect.

When the fan is set in this way, the colour transition will not be natural, perhaps because the light guide layer's area is limited and not enough stereo.

Heat dissipation performance, the first statement about the hand of the 10700 k belong to partial carving constitution, for the whole core 5.2 GHz + Ring4.7 Ghz core voltage (1.33 V), the strength ice god G360 dreamland clamped down the problem is not significant, CPU temperature baking machine PACKAGE of up to 84 ℃ (room temperature is roughly 23 ℃), the eight-core temperature is lower. Fan speed with the Z590 motherboard is not displayed, and experience down the noise level is acceptable. Still, as long as your CPU constitution is not too bad, it had a reasonably average heat dissipation performance. Otherwise, the big thunder god won't save.

A new generation of cooler supreme ice god G360 dreamland water-cooled, belong to the second generation ARGB plaything, whether on the visual effect, or software control, all have improved than the previous generation, especially water head RGB effect is excellent, playability is to support the highest 60 independent lights, adjust colour, play with light users, the Gospel of water, of course, nature also cannot leave the cooling performance, its performance level is not the highest, but the general level of i7 overclocking can be competent, Guangdong price is 999 yuan, if the article is helpful to you, to support sound, thank you.